Welcome to the world of Sonado Inc.!

The world of the dark future, where game market is ruled by a single game console maker monopoly.

The year was 202X...
After Black Game Wednesday all major hardware manufacturers, console makers and publishers experienced 99% market fall. Cryptocurrencies hit a new record and nobody wanted to deal with gaming hardware whatsoever. Nodiva and CPtel stoped GPU and CPU manufacturing and totally switched to crypto-mining hardware. Other players left the market as well.

Many years after the crash, when all gamers were back to boardgames, only one company risked to enter the market again with the series of 8-bit consoles. When nobody believed... Becoming a greedy monopolist, controlling 98% of the market.

Now all developers must release on their hardware, use their dev kit and obey their rules and regulations. Even landing a contract with them is a big deal!

You just joined the ranks of licensed Sonado Inc. developers and got the privilege to release games.

With Sonado Inc. rules and limitations...

How to Develop and Publish Games

You development desk consists of the following items:

Use editor to modify the rom image.

On any stage you can publish the game by flushing existing ROM chips. To do that, execute [publish] command and provide it with number of ROM chips to burn.

After publishing, the game starts selling on the market - you should see some increase in balance each day. Every 10 days you gonna get a sales report from Sonado Inc.

Sometimes you would end up without ROM to burn - you can buy more on the market (option available from terminal's main menu). 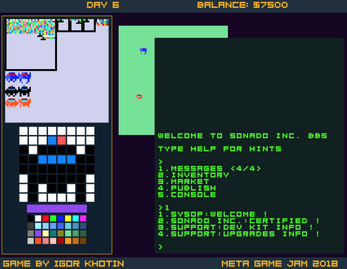