It's a day of Energy Rush for Zeta Eridani D mining colony. The planet has received a strong tide from its two suns - a unique moment occurring once in 165 years. Now volcanic activity pushed radioactive crystals directly to the surface.

Who is going to profit from this nature's unexpected surprise?

ExoSurvey and Mining Co. is out of business for more than a decade. Its massive fleet of mining robots is wondering aimlessly on that inhospitable world.

But 4 mining companies have found the access to the orbiting control satellite. They have been able to capture some robots by uploading custom firmware.

The reconfigured mining bots have one crucial ability - Cyber Sneeze. They send a powerful radio-burst to cause buffer overflow and update firmware in the receiving units. All competitors are planning to use cyber sneeze to capture as many robots, as possible, and take control over the mining operations.

Use the mining robot under your control to cyber-sneeze all the competitors out of this planet!

You can move the robot over the planet surface. Discovered energy crystals are automatically consumed and refill robot's capacitors.

The most crucial thing in movement is energy control. When a robot stand still, its transponder is recharging up to the maximum available amount. When the robot walks, the energy slowly moves back to its receiver. The energy accumulated in the transponder is used to sneeze. The energy in the receiver protects the robot from buffer overflows and infection of foreign firmware.

The Company recommends the following strategy:

10  Move around
15  Look for energy crystals to accumulate the energy.
20  When energy is maxed out, look for a big group of enemy robots nearby
30  Get in the middle of enemy group
40  Stand still for a couple of seconds to recharge the transponder
50  Cyber Sneeze!
60  Goto 10

You can select a different firmware chip to change the behavior of infected bots. You can even give up the control of current robot to itself of jump to another bot on your team!

You can actually upload a custom firmware chip!

The Company has promised to provide some firmware updates in the nearest future. It would include chips for smarter behavior.

But you don't have to wait - the robot assembly instructions are included and you can roll out a smart firmware of your own!

I don´t understand what I have to do...Your loading screen was amazing btw.

Thanks for the playtest! I'm sorry about the missing manual - haven't managed to squeeze that into the jam. Probably should have put at least some kind of simple splash screen with instructions and controls))) 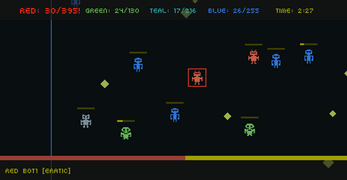