Command a mechanical force to victory over the opposing teams.

Supports local split-screen multiplayer for up to x4 opponents.

Nobody remembers how the war started, but it has been going on for centuries. Deadly machines are roaming this wasteland, blowing each other to pieces.

You can take control over one of the armies.

The neural control interface can link only with a single mech at any time. However, you can jump between them to give orders or take manual control.

Each has firmware that determines its team. Mechs without a team are considered neutrals. They are colored grey and do not participate directly in the battle but can be captured by other teams.

A mech can interface and capture a neutral one by ramming it.

Up to 4 teams can be engaged in the battle.

The teams stat is shown on the title bar, so you can instantly figure out how many mechs each of them has.

These factories are marked with $ symbol.

Mech Factories are constantly producing new mechs.  Initially, these mechs are neutral, so you need to position a couple of your mechs nearby for capture. Set their orders to "Ram Neutrals".

R - jump into the next mech

F - give up mech control

Right Shift - use or fire

PageDown - jump into the next mech

PageUp - give up mech control

] - jump into the next mech

[ - give up mech control

Numpad 7 - jump into the next mech

Numpad 9 - give up mech control 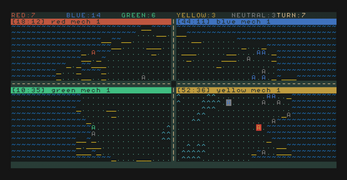 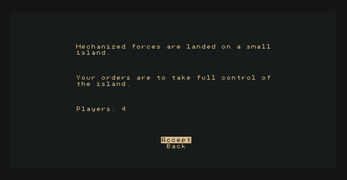